How I learned to stop worrying and love the oscillations 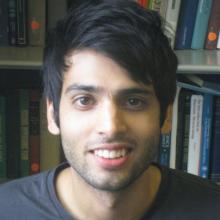 Recently everyone I know has been asking me how my new job is going. And while I'm flattered that they care, I tend to get weird looks when I tell them that it feels like starting graduate school all over again. But, like, in a good way.

As a graduate student I worked with Professor David Masiello in the chemistry department, and I can't say enough about how amazing an experience it was. With his group, I studied how light, heat, and charge can be manipulated and controlled on the nanoscale using tiny pieces of metal. These so-called metal nanoparticles, typically pieces of gold or silver in the roughly 1-100 nanometer range, support resonances called plasmons, where the metal's conduction electrons collectively and coherently oscillate due to some external forcing. In other words, light hitting the particle can push all its free electrons back and forth, and these electrons sloshing around heat up or light up or cough up other electrons. It turns out, as metal nanoparticles are aggregated and their plasmon resonances are manipulated, they can be used to make all sorts of things, from chemical sensors to camera lenses to even transistors, at incredibly small length scales. The subject of my thesis then was the development of mathematical models of these charge oscillations to help guide the design of new devices and new measurement techniques.

Plasmons aren't as sci-fi as they sound. In fact, they're actually how stained glass works. The glass, while being made, is mixed with crushed up pieces of metal. Then, when the glass is set, light passing through it excites plasmons in the metal pieces causing them to light up. So in some sense, it’s very old technology.

But anyway, the job. A couple months ago I started working at the Institute for Disease Modeling in Bellevue, WA. It's been incredible. IDM works in collaboration with organizations like the Gates Foundation, WHO, PATH, and governments worldwide to study preventable disease spread and inform global eradication efforts. In collaboration with my team, my role is to develop predictive mathematical and statistical models of Measles and use them to optimize vaccine campaigns.

Adjusting from optics to epidemiology is an ongoing learning experience for me, so some days at work you might find me struggling underneath a pile of papers trying to decide which immunology words to look up first. I guess that’s what I mean by starting graduate school all over again. But, like I said, I mean that in a good way.

Mathematically, there’s significant and, for me at least, unexpected similarities between models of infectious diseases and models of plasmons. In the latter case, the dynamics are associated with the average position of the electrons, while in the former case they’re associated with the infection status of people in a population. Yet both systems can be thought of as oscillators, whether its electrons moving back and forth or diseases transitioning from high to low season and back again. And while there are important differences between the systems, like the roughly 20 orders of magnitude difference in frequency or the nonlinearity in disease dynamics, I’ve been amazed at how much intuition from plasmonics holds true in the disease modeling context. Even though we’re always told that math is universal, it never gets old seeing it in practice.

But still more significantly than that, my education at UW Applied Math and my research with David taught me, more than anything, how to teach myself. One thing I think every graduate student at some point contends with is the oscillations in confidence that happen when you start doing something completely new. I’m very thankful to the Applied Math faculty and their students, David and David’s group in particular, for helping me learn to navigate that. Starting graduate school all over again wouldn’t feel good had it not been for them.

One last thing: the title of this article came from a talk title by Scott Moe, a friend of mine and fellow recent applied math PhD. In his case, Scott was studying numerical methods for solving nonlinear fluids equations, and he was working with oscillations that appear in the numerical representation of shock waves. I hope that means I’m not the only one obsessing over oscillations.