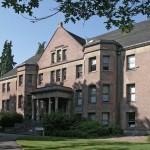 The National Research Council (NRC) just released its long-awaited ranking of over 5000 PhD programs in the US. It ranks academic programs broadly on 20 categories. The scores are then synthesized in a statistical Regression (multiple linear regression to infer the 20 attributes of a successful program) to come up with a set of weights to apply to the individual scores. This yields a final program score (the R-ranking score), which is actually a range. The top two programs in Applied Mathematics are Princeton University and the University of Washington, Seattle Campus. Princeton’s score is 1-3, while UW’s score is 1-4. The left range reflects the 5 percentile ranking and is the score most often reported by universities as “the best overall ranking”. This score shows Princeton and UW tied as the #1 programs. The right range reflects the 95 percentile (“worst ranking” ) received by the survey, which is #3 for Princeton and #4 for UW. The next highest ranked program is Brown at 2-6, followed by Cornell at 3-12, and Arizona at 3-14. Rounding up the top 20 are: UCLA (3-13), Courant (3-14), Caltech (4-15), Northwestern (4-16), UC-Davis (5-16), Maryland (4-15), MIT (5-17), Stony Brook (6-19), Rice (8-18), UTA (6-19), USC (7-19), Colorado-Boulder (10-19), Columbia (12-19), Harvard (12-21), Iowa (18-23).

A more detailed analysis of the complicated NRC ranking methodology and how well other UW departments did can be found in this link from the Graduate School.

There is a separate ranking, called the Survey-based ranking or S-ranking, which differs from the R-ranking method mentioned above in using a different set of weights for the 20 categories to come up with a final score. Faculty evaluators were asked which attributes are important in determining a program’s success, independent of which programs they think are successful. This survey-based weights were then used in arriving at the final score. UW’s Applied Mathematics received the score of 4-15 under the S-ranking. The details of the various rankings for this department can be found here.