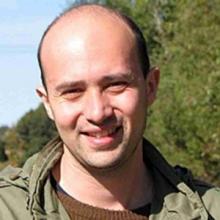 Hi! My name is Eli (pronounced as “Ellie”) Shlizerman. I am excited to assume the appointment as a joint tenure-track Assistant Professor at AMATH and EE departments at UW. I received my MSc and PhD degrees in Computer Science and Applied Mathematics from the Weizmann Institute of Science, Israel. My training is in dynamical systems, model reduction and complex dynamics. After fascinating postdoctoral research at UW AMATH and Princeton University I joined UW AMATH core faculty as Assistant Professor without tenure in October 2012.

My research is focused on understanding large-scale neuronal systems. Networks within such systems warrant computational and mathematical analysis since they appear in different architectures and are designed to perform incredibly complex functionalities in real-time. For example, the olfactory system in insects singles out specific scents from a mélange of molecules and facilitates instantaneous decisions regarding flight direction. The visual system, on the other hand, simultaneously processes light into objects, separates background from foreground, tracks motion, and facilitates muscle movements. Beyond these capabilities, neural networks are ‘plastic’ in that they learn and adapt to improve performance and accomplish new tasks.

How do we analyze and model these systems? Modeling neuronal networks of actual scale have been enduring challenges due to the vast number of neurons and connections in the network, and also due to the fact that neurons and their interactions are dynamic processes. To address these complexities, I am developing methods that combine dynamical systems theory and machine learning to analyze simultaneous responses of cells in the nervous system, and to construct models of network architecture and neuronal dynamics from the data. I am particularly excited about working with real data and thereby collaborating with UW Biology, U-Mass Neurobiology, Seoul National University, and the Allen Institute for Brain Science.

A fundamental problem in neuronal networks analysis is to understand the relation between stimuli and signals of a neuronal network. For that purpose, I am developing methods to classify the signals that the network produces into specific perceptual commands, called neural codes, from masses of multi-neural data generated by the network when it responds to stimuli. The neural codes that we infer characterize network functionality and are being used to map network connectivity.

One of the vital model neuronal networks is the olfactory system, which is strongly correlated with specific sensory stimuli. However, fundamental questions on how the neural coding for the sense of smell is performed remain unresolved. In ongoing research with experimental collaborators at UW Biology, we have developed a series of classification and recognition methods for inference of scent encoding neural codes from electrophysiological recordings from moths. The methodology was used to automatically extract dominant molecules in floral scents and to examine the effect of background pollutants on moths’ ability to detect the flowers they pollinate. The methodology was also designed to reconstruct a connectivity map of the primary olfactory processing unit, the antennal lobe. This work was published in Science and featured in sensory biology research community as well as in the press: NY Times, BBC, TV etc.

Right: A data-driven reconstruction of a moth’s olfactory neuronal network.

Another example of a sensory system performing a unique and complex task is the time-compensated sun compass in migratory monarch butterflies. Each year, the monarchs fly from North America to their overwintering sites in Central Mexico. In their journey they use an internal sun compass, combined with a circadian clock, to maintain a constant southerly flight. Based on analysis of all possible combinations of neural signals that encode the horizontal sun’s position and the time of day, we proposed a configuration of a neural network that provides angular position control in the southerly direction. Furthermore, the analysis proved that such circuit configuration is unique. The work was recently published in Cell Reports, in which we found remarkably similar behaviors of flight adjustment in simulated model trajectories and in trajectories recorded from butterflies flying in a tethered simulator. The work and its findings were covered by national and international media outlets such as the BBC, CBC, Radio and TV.

Analysis of the internal sun and circadian compass mechanism that monarch butterflies use for flight adjustment during migration.

When a neuronal network has been mapped, the next step toward creating a model is to understand how it transforms neuronal signals to physical responses. By studying the nervous system of the C. elegansroundworm, the only organism for which the entire neural network is known, we have constructed a full neuron dynamical model for the nervous system, a visualization framework to interactively study its dynamics, and a bio-mechanical model for the body of the worm. By combining the models, we can simulate how the nervous system triggers particular movements in the body.

In my future work, I plan to expand the classification framework to connect sensory neurons that read stimuli and motor neurons, which control physical responses. By closing the loop between these different groups of neurons, we aim to identify stimuli that trigger specific motor behaviors. With recent technological advances in the resolution of neurobiological network maps, work has the potential to provide the necessary framework to model actual neuronal circuits within the nervous systems and to synthesize neural signals produced by the system. Furthermore, the framework will be able to interpret these signals and apply control to them.