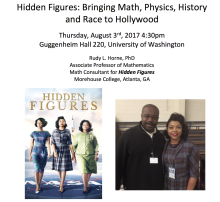 Abstract:
In January 2017, the movie Hidden Figures was released by 20th Century Fox studios. The movie tells the story of three African-American women mathematicians and engineers (Katherine Johnson, Mary Jackson and Dorothy Vaughan) who played pivotal roles in John Glenn's successful orbit around the Earth and the NASA missions to the moon.

For this talk, we will give a brief review of the space race going on at the time between the United States of America and the former Soviet Union. We will discuss the lives and contributions that NASA mathematician Katherine Johnson and the NASA engineers Mary Jackson and Dorothy Vaughan made to the space race. In particular, their work related to John Glenn's orbit around the Earth in 1962 and the moon missions. Finally, we will talk about the experiences of being a mathematical consultant for this film.