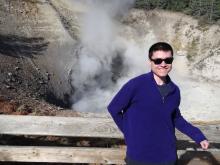 I wasn’t really sure what was going to happen after I graduated with my 4 year degree. School was all I knew. Imagining my life post-academics was like imagining next year’s Christmas on December 26. Nonetheless, the day came when I completed my B.S. in applied math. My academic career was over and I now had my professional career to contend with. I thought I would feel liberated. Instead, I felt like I had just finished a marathon and now I was expected to cycle the Tour de France. Resumes, cover letters, interviews, no job offers. It took me about a month to realize that my most feasible option with a fresh B.S. in applied math was to take an unappealing programming job. I started drafting my applications to graduate school.

When the dust cleared, I received offers from masters programs at Ohio State and UW and a PhD offer from University of Arizona. I still wasn’t committed to the idea of a PhD so I picked UW over OSU and was officially a graduate student.

The move to Seattle was hectic. I took the GRE math subject test the day before I left Ohio (I thought it would be good review) and arrived in Seattle just 3 or 4 days before orientation. I had the foresight to book a hotel in advance but not to actually figure out where I would be living for the next year. I managed to find a place to stay and showed up to orientation with high hopes.

I didn’t know what to expect from grad school but I felt secure. My undergraduate experience was straightforward enough and I expected grad school would be more of the same. I trudged through my last semester of undergrad classes but I was eager to start at UW. A new environment, new responsibilities, stipend money: moving up to the graduate level felt like a promotion.  Even though I was loathing school just months before, I could hardly wait for the start of my first quarter at UW. I had warmed up to the idea of graduate school. I was even thinking about moving onto a PhD after my masters.

I signed up for the hardest classes I could, without the slightest trepidation about being underprepared for the material/workload. When I told my schedule to older students, they would just say, “Oh, taking a double dose of Bernard?” I was cautioned multiple times by multiple people that the department chair, Bernard Deconinck, had a reputation for giving tough classes. It might not be a good idea to take two of his classes my first quarter, they warned.

Bernard himself was among the cautioners. During my first class at UW, he told us that students were expected to become an order of magnitude smarter when they start graduate school. But how long a student will take to make that leap depends. I must have been on the lower end of the spectrum. Lectures were too fast: by the time I had caught up to the professor they had already moved on to the next topic. The first homework sets were long and seemed too difficult to complete by myself. I felt challenged, but not overwhelmed. I figured this first week would be the worst and I would just have to stick with it. It turned out that the first week was really just the tip of the iceberg.

As the quarter went on, the material got more advanced and the workload piled up. Office hours seemed mandatory; the line between weekend and weekday blurred; I developed a taste for black coffee; long work days became an excuse to order take out. Six hours of sleep became the new normal.  I spent so much time in Lewis hall that classmates joked it was my home.

But what I remember better than the long nights in Lewis are the faces I shared it with. My first year of graduate school has been a success because I found myself surrounded by incredibly smart and motivated people. I was never alone when faced with challenging coursework because of my classmates. They were not only colleagues but also friends. Older students and professors, seeming almost sage-like in their knowledge, were role models.

There were times when I felt frustrated and tired and wondered if I was ready for graduate school. But as the year progressed and I enjoyed more academic success, these fears assuaged. I’ve always believed that hard work is repaid eventually. The past year has absolutely reaffirmed this.  The move from undergraduate to graduate was a jump, but it looks farther than it really is.

Now that I’ve graduated from UW with a M.S. in applied math I’ve set my sights on a doctorate degree. Starting this fall I will be a PhD student at Cornell University studying systems engineering. After my time as a masters student I feel confident working at the graduate level.