A Career Transition into Applied Mathematics 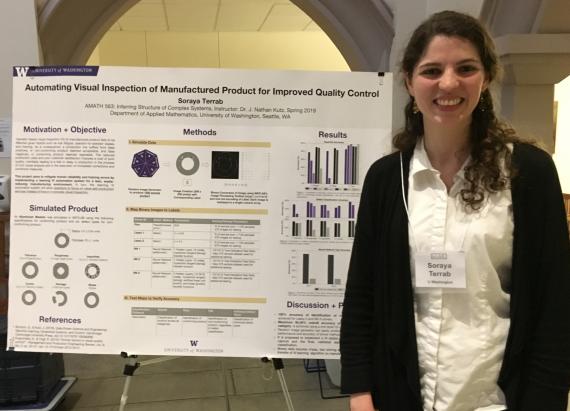 After an undergraduate in Physics, I completed an MS in Mechanical Engineering in 2015 and worked in industry. I started as a manufacturing engineer and later stepped into a quality manager role. Not before long, I was unsure where my career in engineering was heading and I became nostalgic for the classroom environment and the entrancing mathematical derivations that kept me hooked on assignments and projects for periods without end. From physics to engineering, I was interested most by the mathematical models to describe a system and I was captivated by the mathematical methods that can be applied to any discipline. I made the decision, in August 2017, to transition out of my industry job to pursue a PhD in Applied Mathematics. The following spring, I chose to begin my career transition as a funded Master’s student at UW Amath, where I could focus on coursework and computing skills before starting on research.

The UW Amath program was like drinking from a firehose and exactly the right intensive experience for a successful transition into applied mathematics. I was new to the fast-paced quarter system and naturally, I was pretty rusty on my integration and differentiation tricks after three years in industry. Luckily, as a teaching assistant for undergraduate Calculus II that first quarter, I had the right side-gig to my three graduate Amath courses to get me up to speed – in calculus at least. The extensive assignments for the Nonlinear Waves (AMATH 573) course were great practice and taught me, as a beginner applied mathematician, to make use of the right tools. While I enjoyed relying on pen and paper, and many sheets of scratch, to work out a derivation, I came to learn that it is valuable if not necessary to make use of Mathematica or Maple through the process. Similarly, the UW Amath instructors, graduate teaching assistants, and peers were all part of a support network. When I was stuck on a problem, it was worth asking one of them, or even a couple, to help fix a bug or simplify a derivation step. Coming from an applied, technical background, I most importantly had an opportunity to catch up on the mathematical rigor, across analysis and numerical computation topics, and to develop the right mathematical intuition rather than to rely on the physics of a problem.

After adjusting back to student life and taking time to explore the Seattle area, I was better prepared and confident in learning different topics. Little by little, I was more inclined towards numerical computation despite my comfort and experience in the analysis topics. I developed computing intuition and curiosity in solving problems numerically, that I eventually signed up for the Inferring Structures of Complex Systems (AMATH 563) course. I grew to appreciate the power of linear algebra, despite my earlier challenges, and I consequently strengthened my understanding of it through project-based learning. I had the most fun coding and presenting my final project on machine learning methods in solving a problem I faced in industry as a quality manager. Ironically, I ended the UW Amath program stronger in areas that I have never been exposed before.

The UW Amath Master’s was a great program to catch up, learn, and grow into the field of applied mathematics and I will now continue onto a PhD in Applied Mathematics at the Colorado School of Mines (CSM). I am excited to launch my research career at CSM this August, given a funded research project with Prof. Stephen Pankavich. The project will focus on the global sensitivity analysis and particle-in-cell simulations of collisionless plasmas modeled by the Vlasov-Poisson system of PDEs. While I have not explored plasma dynamics before, the analytical and computational methods I have studied at UW and the skills I have acquired this past academic year have prepared me for what is yet to come.