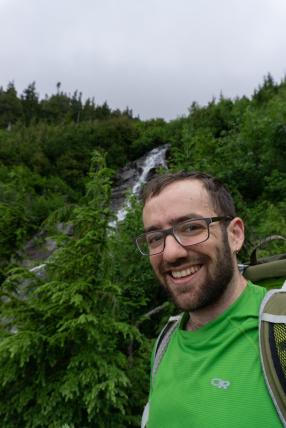 I visited the University of Washington as a prospective graduate student just over five years ago. I stayed with a student in Fremont, went climbing, ate great food, and enjoyed the seemingly laid back nature of the department. That weekend alone was enough to sell me on coming here. What really set applied math at the University of Washington apart to me was that the people in the department had such different academic backgrounds and interests. Fitting in with the department, I could see myself pursuing countless opportunities of research with extraordinary people while also getting to explore the city and surrounding wilderness.

I've often heard that the first year of a PhD is the hardest. You're taking classes, studying for quals, TAing sections of calculus, and getting used to life in a new city.  This rang true in my case - the first year was difficult. I recall working through long problem sets with friends, staying up late grading calculus finals, and constantly questioning if I was doing the right thing with my life. It was hard for everyone though and the challenge made for a great bonding experience with my fellow students. In hindsight, I think this is the year for which I'll feel the most nostalgia.

Things got a lot easier after quals and course requirements were done. Milestones included getting research published, presenting research, and traveling to conferences. Most importantly, I developed a close relationship with my advisors and their other students. I think the most significant predictor for one's success and happiness in grad school is their relationship with their advisor. I was lucky to work with Nathan Kutz in applied math and subsequently with Steve Brunton in mechanical engineering as a co-advisor. They were patient and encouraging, even when I had long periods of stagnation and struggle. I also had great friends and role models in my fellow students.  I looked up to Krithika Manohar, who was a year above me and also helped explain the process of applying for postdocs. Charlie Fiesler was a great friend and I enjoyed talking with him about anything from math and academics to politics.

When people ask me what applied mathematics is, I often tell them that it's ill-defined and that just about any science or engineering PhD could be considered applied math.  However, being ill-defined leaves a PhD student in applied mathematics with a tremendous scope of potential projects. My graduate research has wandered around, from computational neuroscience, to mathematical biology, to data-driven methods for studying dynamical systems. This was further facilitated by the collaborative nature of the University of Washington as a whole. As a result, I was able to apply for post-doctoral positions in a variety of departments including, math, applied math, mechanical and aerospace engineering.

Five years ago, when I started the PhD, I thought of myself as pretty smart. Finishing a PhD has been a humbling experience. I'll be moving across the country this summer to start a postdoc in the mechanical engineering department at the Massachusetts Institute of Technology. This is much more intimidating than starting a PhD, even though I have a much better idea for what I'll be doing. But I know there are a few areas where I'm competent enough thanks to what I've learned from my professors and fellow classmates at the University of Washington.