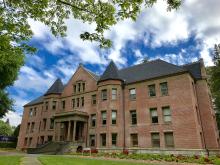 When I was a teenager, I fell in love with the mountains, waters, and trees of the Pacific Northwest and resolved to settle here.  This dream was realized when Fred Wan recruited me and Prof. Loyce Adams into UW’s newly formed Department of Applied Mathematics in 1985, fresh from MIT and a 1-year postdoc at the National Center for Atmospheric Research in Colorado.  Prof. Carl Pearson gave complete lectures on complex analysis off of a single notecard, Prof. Jirair Kevorkian’s partial differential equations courses evoked awe and terror, and Prof. Bill Criminale sung opera arias in the stairwells of Guggenheim Hall.  Birds flying into my classroom livened my lectures on analysis and fluid dynamics, while every weekend of good weather was spent on precipices and peaks.

It was a time of rapid change.  The department was developing its role in teaching a broad spectrum of technically-oriented graduate students, working on cementing good collaborative relationships with Mathematics and the School of Engineering that would allow it to expand its scope.  Through my research on atmospheric convection and cloud formation I also had a strong connection with the Department of Atmospheric Sciences, and I was offered a half-time appointment there in 1988.  A few years later, I moved my office to that department, but I continued to enjoy mentoring memorable Applied Math graduate students (Angel Muleshkov, Steve Siems, Dave Stevens, Hugh Rand, Ben Moskowitz, Matt Peters, Junya Uchida, Chris Jones and Sean Santos) who had to learn an obscure cocktail of obscure equations describing the dynamics and thermodynamics of clouds, then set them in computer code.  Meanwhile the department was expanding into new areas such as math biology and data science and upping its research and teaching game.  I was entrained into a new set of teaching challenges in numerical and data methods, inspired by the ever-improving cohort of students.

Prof. Nathan Kutz’s ambitious vision of expanding the department’s reach using our on-line masters program and by placing a successful bet on mathematical finance brought us into the new digs of Lewis Hall. The cross-campus walk across Red Square and the Quad reduced my day-to-day interaction with Applied Math, but I have enjoyed the diverse students, dynamic new faculty, and Prof. Bernard Deconinck’s strong leadership that have marked the last decade.  Over my last two years on leave at Vulcan, Inc. downtown, I have been leading a small research group that is exploring a new challenge, the application of machine learning to automating and improving how climate models are developed.  I recently retired from UW at the end of August to continue this effort as a part of the Allen Institute for Artificial Intelligence (AI2) on the north shore of Lake Union.  In this role, I hope to continue to participate in the life of the department and perhaps recruit Amath students as interns or employees.  It has been a privilege to participate in the world-class quality and relevance of our program and watch it flourish.