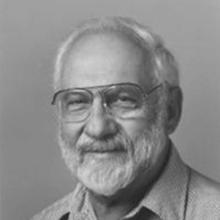 We are saddened to share the news that Jerry Kevorkian, founding member of our department and one of its first chairs, passed away on Tuesday 11/9 after a 24 hour hospital stay.

Jerry was a world expert on asymptotics and perturbation methods, applying them in a wide variety of application areas. In addition to supervising 14 PhD students, he (co-) authored a number of books, including a classic on multiple scale perturbation methods, with his PhD advisor Julian Cole, and an important textbook, still widely used, on a Green's function approach to partial differential equations. An avid sailor, Jerry became an equally avid woodworker in retirement.

We encourage you to share your own memories and recollections of Professor Jerry Kevorkian. Please fill out the form located here.

Jerry Kevorkian was a colleague and a mentor of mine in the years I was a faculty member at the University of Washington. Jerry Joined the faculty in Aeronautics and Astronautics in 1964, I joined in 1967. He was one of the reasons I chose the UW after graduation from Stanford as his research work was closely aligned to my research interests at the time – a rather esoteric part of applied mathematics, called singular perturbation theory. One physical example of this field is found in the theory of artificial earth satellite trajectories, the so called “critical inclination problem”. This was in the 60ties and there was a small group of researchers pursuing solutions to this problem. As is often the case in academia, there were some strong and differing opinions on how the problem should be attacked and, what should be considered as a solution thereof. Jerry’s work differed from that of others in the field and his approach appealed to me. Over the years, Jerry and I had many a conversation on this topic, often over a suitable beverage. When the concept of a department of Applied Mathematics was broached by Jerry (and Carl Pearson, Bill Criminale), I enthusiastically joined the team. Of course, I was still “wet behind the ears” as a faculty member not to recognize the penalties that such an endeavor would bring. As the saying goes, that is another story.

The other side of the Jerry story is non-academic. When he joined the faculty of AA, he was new to Seattle and Washington. He became fascinated by sailing, but knew nothing about sailing. He joined the Corinthian Yacht Club and bought his first boat, an Ensign 21 foot day sailer. Then, given who he was, launched into the midweek evening sailing races off of Shilshole Marina. He needed crew and so I said, sure, why not. My job as crew was to execute the captain’s orders, some of which were, to be kind, bizzare. We learned quickly and did have some success. One such notable excursion had to do with an overnight race out to Port Angeles and back.  When night fell, so came the fog. I think pretty much everyone else elected to go and hug the shoreline on the way back. We, fueled by the traditional beverage of brave sailors (rum), decided to mainline it down the channel of the Straight of Juan de Fuca, even as we could hear (and sense) the freighters coming. When dawn broke, we came out of the fog bank off Edmonds and there were no other boats in sight. We sailed on down to Shilshole and learned that we were indeed the first boat, regardless of class, to finish. There are many other stories (how can there not be given that sailing was involved?) and the memories are priceless. Jerry went on to other boats, we shared sailing on the Sound as well as vacations in the Caribbean. The Caribbean vacations were bare boat charters. At this point, Jerry was a seasoned sailor meaning that he had a more mature approach that did not result in good “war stories”. He was also the best man at my wedding to Linda 42 years ago. Another aspect not noted is that he was an excellent cook and Linda and I enjoyed numerous dinners with Jerry and Seta.  I retired in 2002 and moved to Lake Wenatchee on the other side of the Cascades. We lost touch, but the memories linger on – a loss of someone who was an integral part of my life both academically as well as socially.

I have very fond memories of my classes with Professor Kevorkian - one of the first that I took as a new graduate student in AMATH. Nearly 30 years later, now a professor of applied mathematics myself, his textbook is still an important and well-loved part of my collection of hardcopy books.

At the time I knew Professor Kevorkian, he had a jolly face with a balding head and completely white hair. By the end of every lecture, his nose and forehead would be a curious shade of blue, thanks to the whiteboard markers and his habit of rubbing his head or pulling on his nose while working at the board. It was hilarious to watch - and I learned to be very careful not to touch my own face while lecturing at a whiteboard!

Professor Kevorkian was working on a new edition of his textbook at the time, and offered 25 cents for every typo found by students. One of the graduate students became quite attached to this challenge, and appeared to emerge from his office almost daily, a few more coins in her pocket. I'm sure that Professor Kevorkian was most grateful, but he was naturally frustrated that there were so many typos and complained that she was going to bankrupt him!

I am grateful to have been a student of his, if only for a brief time, and am sad to hear of his passing. I am glad to have this opportunity to share some of my memories of him.

I was one of Jerry's PhD students (his last one), and have so many fond memories of Jerry. I was so saddened to hear of his passing. There were so many memorable moments, so I will just try to share a few here. Happy to share more if needed.

Maybe it was because I was his last student, but Jerry was very hands off with me and gave me an incredible amount of freedom to work and set my own goals in my thesis research. He always offered useful mathematical advice about the problems I had with my research.

I have many memories going out to eat with Jerry and Seta. We talked about food all the time. I remember that one of the most important (to the two of us) decisions about my thesis defense was where we were going to eat afterwards (assuming that I passed).

I am very sad to hear the news of Jerry's passing. He was highly influential to me. I have fond memories of taking his classes and talking with him about research. I learned a lot from him that I carry with me today.

Jerry was incredibly funny. I really enjoyed his jokes (many of which I cannot commit to writing here). He liked to act like he was a cranky old man, but he was incredibly kind and warm. I remember eating lunches in the lounge with classmates and Jerry would walk in to use the sink and just jump into the conversation with a funny quip. It always seemed to me that he enjoyed not-so-innocently teasing me back when I was preparing for my qualifying exams -- I think he knew that I needed that back then. I loved hearing him talk about food, and enjoyed the meals we had together. He introduced me to Calvados, which I still enjoy to this day when I can get it and think of him everytime I do.