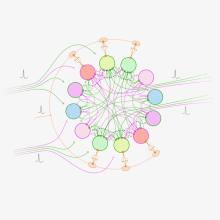 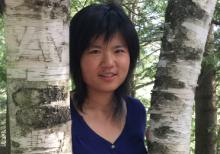 Our thoughts and behavior are the product of vast neural networks inside us.  These networks are wired with stunning and intricate complexity.  But how does this wiring come about -- and how can this wiring process be mimicked in artificial brains for AI?  This requires assigning the right values to thousands to trillions or more of individual connections, so that the network as a whole produces the desired behavior -- a daunting task.  One of the key issues is “credit assignment”: how can one figure out how to change individual connections so that the network’s behavior improves? UW Applied Mathematics PhD student Helena Liu and her colleagues have combined mathematics and molecular biology to find a new answer to this long standing credit assignment problem in this week’s Proceedings of the National Academy of Sciences.  Their paper, “Cell-type-specific neuromodulation guides synaptic credit assignment in a spiking neural network,” is a collaboration between Liu, lead author, with senior author Uygar Sümbül and collaborators Stephen Smith, Stefan Mihalas, and Eric Shea-Brown.

While conventional artificial neural networks consist of neurons connected by synapses whose strengths determine the network output, the team realized that the brain has an additional signalling network that consists of neuromodulators, chemicals like dopamine. "An important contribution of our work is how credit signals can be communicated via local neuromodulatory signals, which had really been underexplored” states Liu.  While dopamine is a very well known example of a neuromodulator, this is just the tip of the iceberg.  In fact, Sümbül, Smith, and colleagues have recently charted the interactions among hundreds of types of modulatory molecules, and found that they follow systematic pathways connecting different types of cells in mouse and human brains.  “That was the clue that motivated us,” says Sümbül:  the brain has not just one wiring diagram, but hundreds, all superposed into what he calls a “multidigraph.”  What Liu and colleagues found is that this multidigraph can solve the credit assignment problem in a new and highly efficient way. Says Smith, “These ancient modulatory signals have been there all along. They never went away, because that is part of learning, and learning is universal among modern animals.”  The team’s work may be one step closer to explaining why, and if so, Shea-Brown adds, “its incorporation into artificial systems may open new and smarter ways to engineer intelligence.”

See more perspectives on this article in the Allen Institute News.