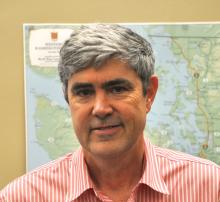 We are delighted to share that Professor Emeritus Randy Leveque has been elected to the National Academy of Sciences.

Randy is one of five UW faculty members to be elected this year. The full list of electees can be found here.

Randy has been at UW since 1985, when he was an Assistant Professor, joint between Applied Math and Math. Since 2001 his position has been in Applied Mathematics only. He has supervised many PhD students and postdoctoral students. Among other topics, he is a world expert on hyperbolic systems and conservation laws. In recent years, his work has emphasized the study of tsunamis.

Randy joins Professor Chris Bretherton (2019) as the second faculty member in our department to be elected to the National Academy. A big congratulations to Randy for his well deserved election!